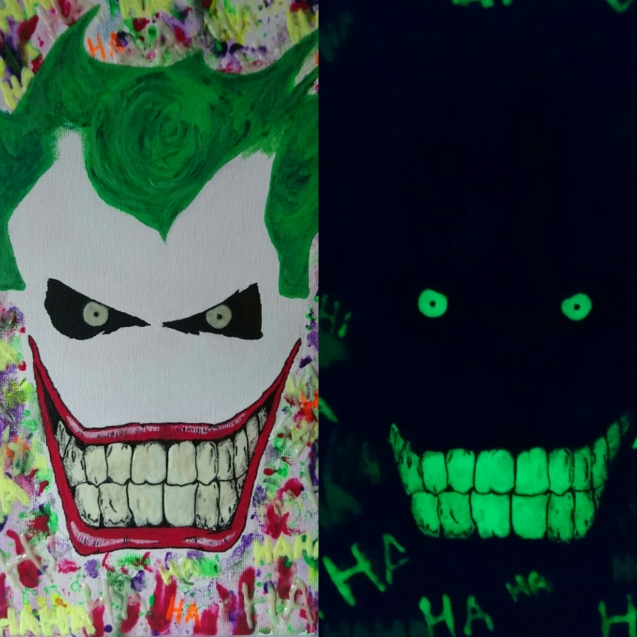 Above: The Joker by day and by night side by side to show variation

Another week down and another painting up. Welcome back to my distracted blog which highlights the paintings I’ve been distracted by. In this blog I present to you “The poisonous glow of the Joker”. 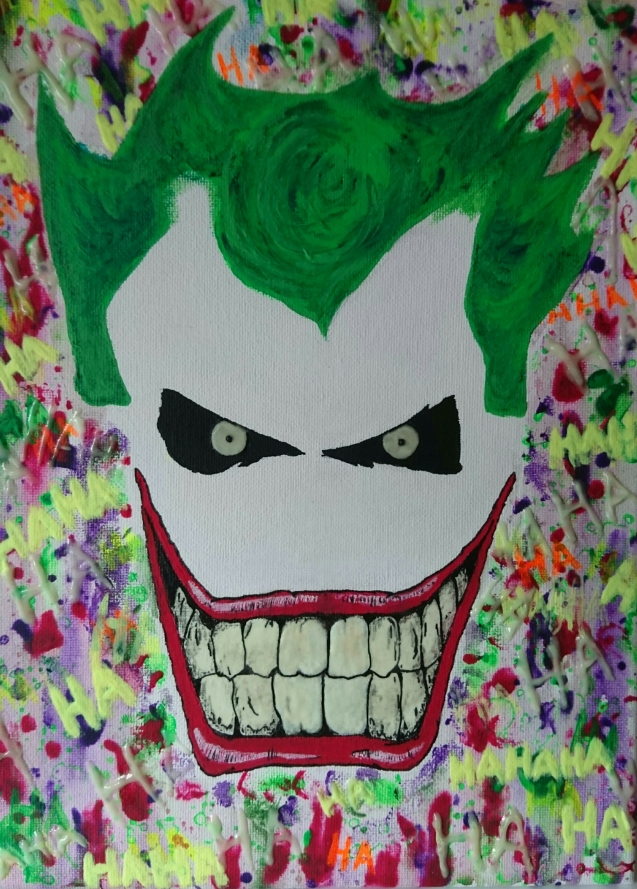 Above: The painting by day

Above: The painting by night

This is a continuation of the previously posted Batman by the Joker and Bane of Humanity paintings – and technically the Deadpool (Redpool & Blackpool) ones too. My aim was to make some small paintings which didn’t involve lots of intricacies but would be visually stunning. I used some established techniques but also learned some new skills to produce this. As you’ll see from the accompanying photos of this painting it has two different looks depending on the time of the day you look at it, by day it’s a regular painting (as regular as a one of my splattered paintings goes), by night it gives a menacing glow. Obviously I used glow in the dark paint to achieve this. Originally I started with glow in the dark nail varnish/ enamel, but I also tried using glow in the dark ink and glow in the dark paint. I found that while the nail varnish was the trickiest to apply to the canvas it actually had the best visual effect. The glow in the dark paint on the other hand was the easiest to apply but even after 10+ coats it didn’t glow as much as the nail varnish did (in the glowing version of the painting, the eyes and teeth are nail varnish, the most visible laughter graffiti is ink, while the feint laughter is the paint.)

As the subject was Batman’s arch nemesis, the Joker, I was happy that the canvas could be relatively messy, which suits my current style. My intention was for the glow in the dark to cut through and grab main attention despite the cluttered and messy background. I found that when looking at the painting at night while it was glowing, the desired effect had been achieved. At night the eyes and smile of the Joker stand out over everything else and grab focal point. Believe me, the painting is a little spooky when you aren’t expecting it, even now when I turn the lights off I can feel something watching me, and that’s despite knowing that it’ll glow when the lights are out. If anyone visits my house they might get spooked out if I let them stay in room with this on the wall. The non-glowing daylight version is still a little spooky as I have used liquid glass paint to make the eyes stand off of the canvas slightly, giving the effect that the eyes are following you.

I’ve got one more DCU/Batman themed painting to come which is a Catwoman inspired painting, it’s almost complete so please check back to my blog soon and let me know what you think. In the meantime thanks for reading this and looking at my Joker painting. I hope you enjoy my art and I’d love to read some feedback and comments. Thanks for being distracted and see you soon.