Above: Jessica’s dragon snoozes amongst the clouds as evening draws in

“Jessica’s dragon” was a gift for friends who welcomed their new baby girl into the world recently. It’s fair to say Jessica’s mother loves dragons (and elephants but that’s a different story) and she told me her favourite colour was orange, which is a nice neutral and fun colour for a child. When we discussed doing a painting she had an image in mind which she’d found online, with that and a bit of creativity on the background I was able to produce a nice and cute painting.

I have to confess that my girlfriend drew the dragon first, she’s trying her hand at painting and crafting, she created a fantastic tiny version of this so I offered her more practise by sketching a nice big dragon on canvas. I think she did it really well and it was easy to work with her penciled design. As well as mixing my colours for the painting I tried using an acrylic iridescent mixer, while it may not be obvious from the photo I can assure you that when viewed from different angles there is a shine to features. The claws, teeth and spines along the back of the dragon reflect a nice glimmer when they catch the light. 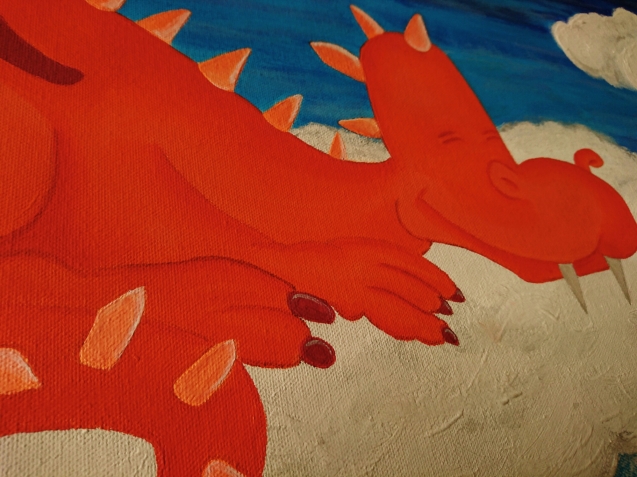 Above: iridescent claws, teeth and spines along the dragons back

The background is a blend of colours I’d expect to see in something cartoony. I layered the clouds to add depth and texture so they appeared fluffy. In the darker parts of the darkening dusky sky I have used metal spine to dab white stars in, some big and some small like the randomness of the sky at night in its glory. 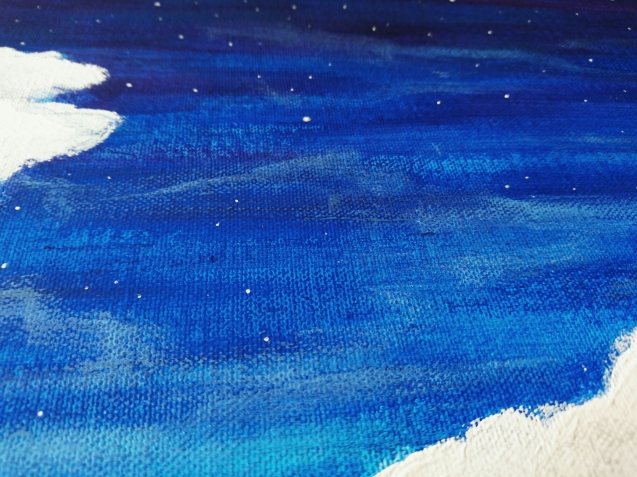 Above: blended sky and stars

This was extremely fun to paint and once finished and baby Jessica was back home with mum and dad, the completed canvas was handed over. It now hangs above the baby’s cot in a plush dragon filled baby’s bedroom.

Thanks for reading, if you have any comments I’d love to hear from you, just fill in the comments box after you’ve given this blog a rating with the stars. If you want a commission doing get in touch, I’m more than happy to paint something for you if you have something sounds fun. See you for the next distracted painting soon. 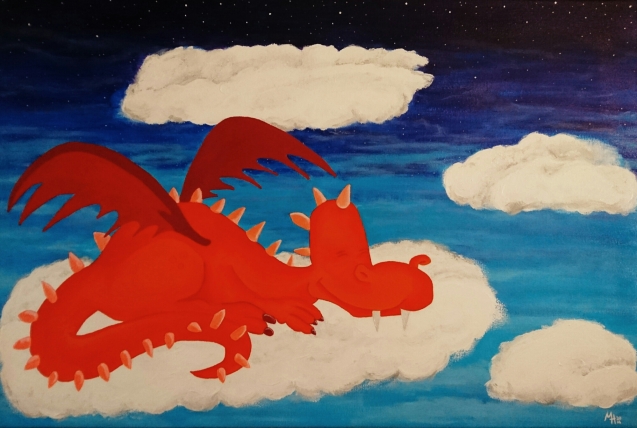